Posted on January 12, 2018 in Reconstructive Surgery 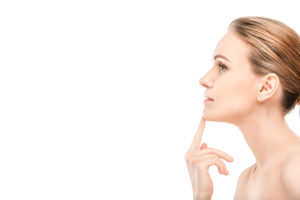 For people with a small chin who want to enhance their appearance there are two options to pursue surgical correction. One option includes using a chin implant, also known as chin augmentation. The other option is to perform an osseous genioplasty, which involves surgically cutting the bone and advancing it forward. We will discuss the pros and cons of each option.

For chin augmentation, we typically will use a contoured two-piece chin implant that will be secured with two to four screws into the jawbone. Typically, an incision is best made underneath the chin, as this gives access to the bone and prevents complication with the muscle. The incision is below the chin, which usually heals as a hidden scar. It is not recommended to perform this surgery by placing the implant through an incision made inside the mouth along the teeth and the lower lip. The reason for this is because once that muscle is detached along the lower border of the teeth it can lead to future problems when smiling. There is also an increased risk of infection requiring removal of the implants at a later time. These types of implants typically will only address advancements of the chin that are less than 7-9 mm. If the chin advancement needed is greater than 1 cm, a chin implant procedure is not recommended. If a chin is asymmetric requiring one side to be advanced more than the other side, then a chin implant will not treat asymmetry. In fact, it could make the asymmetry more noticeable.

For osseous genioplasty, this procedure can address a wide range of issues and concerns, including advancement of the chin greater than 10 mm. Osseous genioplasty can be combined with a jaw advancement surgery to further augment the lower half of the face. The genioplasty can also address asymmetry at the same time, advancing the chin or even increasing the height of the chin. This procedure is much more versatile than simply placing a chin implant for augmentation purposes. Typically, the incision for an osseous genioplasty is through the mouth via an intraoral lower lip incision. A small plate with screws will be placed to fixate the bone that is cut and advanced. Typically, younger patients benefit from osseous genioplasty because the results can last a lifetime with little downside.

The risks involved with both procedures include injury to a nerve causing numbness of the lower lip and chin and possible injury to teeth or tooth roots. An implant malposition can occur with silicone implants; therefore, it is not recommended to use a silicone implant for the chin. Fixating the implant with screws can prevent future migration of the implant. Most surgeons suggest that at some point in the future the implant will need to be removed and replaced. This is due to the fact that it is a foreign body and will likely move over time. Both procedures have similar recovery times where most people can return to work within one week after surgery. Strenuous activity should be avoided for the first six weeks after surgery. A chin compression dressing or garment is worn for three to seven days after surgery.

Typically, cost for chin augmentation can be around $4,000-$6,000. The cost for an osseous genioplasty can be around $5,000-$7,000. Give us a call today to schedule a consultation with Dr. Eric Payne to help determine the best surgical option for your individual needs.